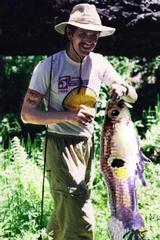 My general interest is in studying the process of evolution by natural selection from an experimental perspective and testing evolutionary theory in natural populations.  I primarily work on guppies from the Caribbean Island of Trinidad.  Guppies are found in high and low predation environments that differ in the species of predators that guppies co-occur with.  This contrast is found repeatedly in different drainages and the different predation regimes are often right next to one another, separated by a waterfall.  Guppies from high predation environments experience much higher mortality rates.  High mortality is associated with earlier maturity, a higher rate of investment of resources in reproduction, and the production of more and smaller offspring.  All of these differences have a genetic basis.  Mortality rates can be manipulated by either introducing guppies from high predation localities into sites from which they and their predators had previously been excluded by waterfalls, thus lowering mortality rates, or by introducing predators into low predation sites over barrier waterfalls, thus increasing mortality rates.  Such experiments have shown that live histories evolve as predicted by theory and in a fashion that is consistent with the earlier comparative studies They have also shown that evolution by natural selection can be remarkably fast, on the order of four to seven orders of magnitude faster than inferred from the fossil record.  I am currently studying the evolution of aging in this same system.

Dr.  Reznick participates in IDEA, the UCR Institute for the Development of Educational Applications and serves as the UCR co-Associate Director of NERE, the Network for Experimental Research on Evolution.