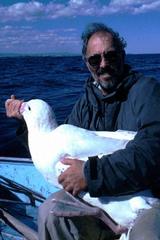 My laboratory studies animal physiological ecology, with emphasis on adaptations to extreme environmental conditions (particularly in desert, polar, and montane habitats), energetics and behavior of free-living animals, evolutionary physiology (particularly of aerobic traits), and behavioral ecology (particularly reproductive effort and signal costs).  I use techniques from mainstream physiology, but am interested in evolutionary and ecological questions as well as organismal form and function per se.  My students and I participate in both the Evolutionary Biology and the Physiology graduate groups.  In addition, I participate in the University of California Intercampus Research Program on Experimental Evolution (UCIRPEE) and its successor, the Network for Experimental Research on Evolution (

Current and fairly recent projects include:

Please note that I am not accepting new graduate students at this time.   If you are interested in doing graduate research as part of the Neotropical bird ecology project, I encourage you to consider working with my colleague Scott Robinson at the Florida Museum of Natural History, or Gustavo Londono at Universidad Icesi in Cali, Colombia. 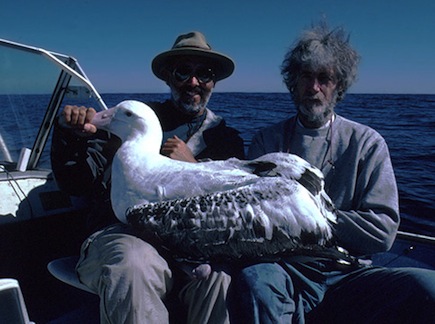 Adult wandering albatross (Diomedia exulans or D.  gibsoni*) captured for metabolic studies off Wollongong on the south-east coast of Australia.  The birds were banded and released unharmed within 2-3 days; they were remarkably placid in captivity.  Wanderers have the longest wingspan of any living bird (more than 3 meters and sometimes as much as 3.6 meters).  Some individuals in this population were first banded in the late 1950s and continue to return to the Wollongong area every winter.  A few are known to be over 50 years old -- the very white male in the photo at the top of this page is one of these.

I'm the one with the hat; the other nonflying terrestrial vertebrate in the photo is Harry Battam from the University of Wollongong, a world authority on albatross biology.

* the taxonomy of albatrosses is currently undergoing revision